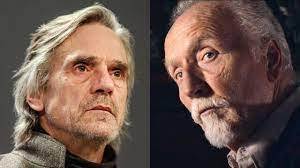 The production was provided by the film director of Spiral: From the Book of Saw.

Last week, the filming of the Cello musical horror was completed in Saudi Arabia. The Deadline portal has exclusively shared the first official film frame and picture from the film shoot. The images depict the featured actors Jeremy Irons (Watchmen) and Tobin Bell (Saw), as well as accompanied by director Darren Lynn Bousman (Spiral: From the Book of Saw, Happy Death Day) in the backstage.

The plot is still known only in general. It is centered around the young and promising cellist who has learned the creepy backstory of his cello. Cello is based on the novel by Turki Al-Sheikh, who also scripted the movie.

The cast includes Samer Ismail (The Day I Lost My Shadow), Elham Ali (Ashman) and Mila Al Zahrani (The Perfect Candidate). The сinematography was provided by Maxime Alexandre, whose accomplishment record includes a number of remarkable projects, such as Resident Evil: Welcome to Raccoon City, Shazam! and The Haunting of Bly Manor. The movie was financed by Rozam Media. The release dates of Cello have not yet been announced, but the premiere is expected to take place in 2022.