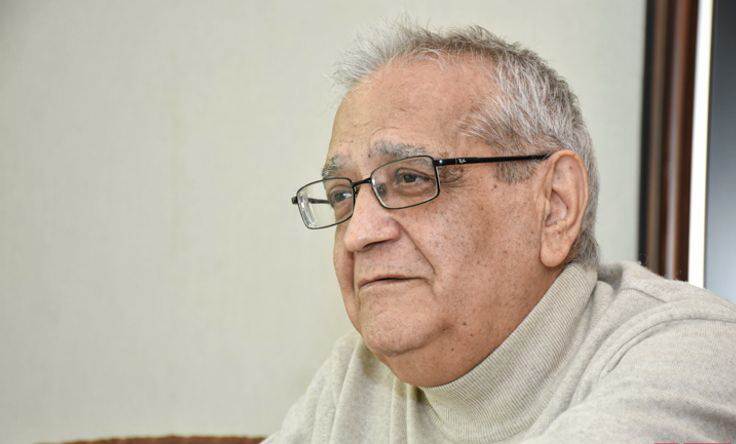 The Honored Artist of Azerbaijan Republic Anvar Abluj is one of the most talented film directors, recognized for his unique signature in Azerbaijani cinema. He is insightful about the events of each period, reflected in his work with great depth. The film director turns 75 (06.01.1947). In his films covering various genres, he competently depicts the events of different eras, their atmosphere, ethic rules existing in society and complex human relations, expressing his personal attitude as an author to the events shown in the films and declaring his position. We congratulate Anvar Abluj on his anniversary, wishing him good health and further success in his creative activity on behalf of his numerous audience and the Board of the Union of Cinematographers of the Republic of Azerbaijan.

Cinematography, showing actual events, appreciates above all verve, bite, and expressive presentation in them. The movies directed by Anvar Abluj with Azerbaijanfilm studio, reflecting the abovementioned aspects, were a wake-up call for the audience, making people turn to them time and time again. His gut-feel approach to events, their presentation in various, original productions, along with their interpretation, contributed to the professional growth of involved actors (mostly young ones).

The creative filmography of the movie enthusiast, who graduated from the Directing Faculty of the All-Union State Institute of Cinematography in Moscow in 1973, includes more than 40 films. Among them are feature films and documentaries, as well as Mozalan movies. It should also be noted that his historical adventure film titled Knights of the Black Lake (1984) was awarded a diploma and a prize of the Central Committee of the All-Union Leninist Young Communist League (Komsomol) at the 18th All-Union Film Festival in Minsk in 1985.

The film covers the events that took place in 1905 in the settlement of oil workers, showing the existing unbearable working conditions. Workers are on strike in the oil fields. There are also children among the characters of the adventure film. The complex and dreary life of minors and teenagers who have known all the sorrow in life so early, facing its challenges, give audience pause for reflexion, causing abomination for exploiters (capitalists) infringing on the rights of children used as labour from an early age.

The hardworking director, who has merits in Azerbaijani dubbing, also contributed to this important area of cinematography. Applying his talent and skills, he has done a great job of presenting movies to the audience in the Azerbaijani language, improving our native language through flawless dubbing (as a director).

The cinematographic work of Anvar Abluj, whose films are still watched with great pleasure, is highly appreciated by our government. He was awarded the title of Honored Artist in 2006, as well as the personal pension of the President of the Republic of Azerbaijan in 2018.