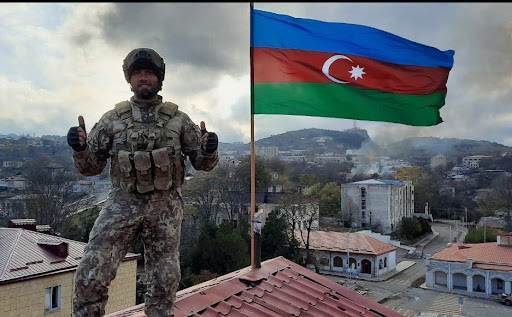 A year has passed since the glorious victory of the invincible Azerbaijani army led by the Supreme Commander-in-Chief Ilham Aliyev over Armenian fascism. The 44-day-long victorious march, which lasted from September 27 to November 8, 2020, turned into a celebration of the just cause of the Azerbaijani people, being an example for the whole world. The 30 years long Armenian occupation was ended. Thus, the great Iron Fist that wiped out the destructive Armenian nature and the ideas of Armenism, revealed the potential of our peace-loving people and the Supreme Commander-in-Chief.

President of Azerbaijan, Supreme Commander-in-Chief of the Armed Forces Ilham Aliyev, as a prominent statesman and diplomat, in his interviews with foreign journalists and messages to the people during the war and in the following days, declared openly that the fight of our people for their sovereign rights and restoration of our territorial integrity will bring peace and socio-economic success to the entire South Caucasus. In his speech at the 8th Global Baku Forum, the Head of State emphasized that we are currently restoring the liberated territories, and a large-scale state program have been launched. Mr. Ilham Aliyev expressed hope for more than a million of our compatriots who suffered from the Armenian occupation to return to their ancestral lands. This war proved that justice will be served sooner or later.

Today, unprecedented construction and landscaping works are being carried out in the territories liberated from occupation. The commissioning of the Victory Road to Shusha and the Fuzuli International Airport in just 8 months once again proves the power of Azerbaijan, as well as the desire of our people to create and our will to win.

These days, many leading states of the world are studying the tactics and strategy of the Azerbaijani army, exploring the subtleties of our victory. There are those who do not conceal their surprise and envy. Azerbaijan is committed to achieve even greater success subject to the all-round support of friendly countries, and fraternal Turkey above all others.

Like all our people, cinematographers support the just cause of our country, as well as the President of Azerbaijan, the Supreme Commander-in-Chief. We will do everything possible to perpetuate the history of Azerbaijan's victory in the film world. The newly released films Şuşa, Sən Azadsan (Shusha, you are free) and Biz (We) stand for the good news brought by moviemakers about the great victory.