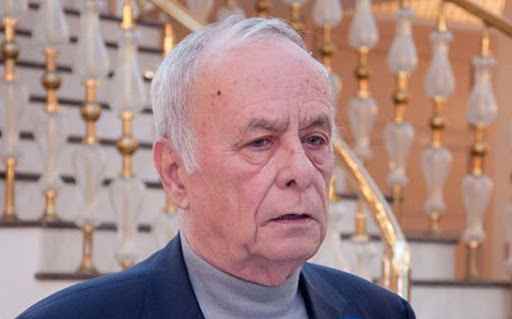 Azerbaijani culture has suffered a heavy loss. On April 16, 2021, the famous film director, screenwriter, People's Artist, laureate of Azerbaijan State Prize, Professor of the Department of Cinema, Azerbaijan State University of Culture and Arts, Secretary of the Union of Cinematographers of the Republic of Azerbaijan, President of the Film Directors Guild of Azerbaijan, Member of the Board of Trustees of the Baku International Center for Multiculturalism, Eldar Guliyev Tofig died at 80 ages from a long illness.

Eldar Guliyev was born on January 18, 1941, in Baku. In 1960-1966, he studied in the Faculty of Directing of the All-Union State Institute of Cinematography in Moscow, received education on Sergey Gerasimov's courses. ince 1967, he had been working in the "Azerbaijanfilm" cinema studio. He directed his first short film entitled "Once upon a time...". He is the author of a well-known feature and documentary film. In 1969, he directed his first big screen work entitled "In one southern city" and thus, laid the foundation of the new era in the Azerbaijani cinema.

In 1979, he directed film “Babek”, which in terms of professionalism, the scale of the mass and superstition scenes did not lag behind similar films produced abroad. In those years, the film “Babek” was purchased by 52 countries. In addition, he remade “Main interview”, “Happiness to you, girls!”, “Heart ... heart ...”, “Nizami”, “How beautiful this world is…”, “Hostage” and etc.

He was also the screenwriter of several films. Several of his films have won prizes and awards at film festivals. He worked effectively as the artistic director of the "Debut" studio.

A list of honorary titles and state awards which Eldar Guliyev was awarded:

The Board of Directors of the Cinematographers Union of the Republic of Azerbaijan and its members who welcome the death of prominent film director, People's Artist Eldar Guliyev, who made significant contributions to the development of Azerbaijani cinema, with deep sorrow and grief, express deepest condolences to the family and friends of the deceased and may god give patience.

May your grave full of light, dear friend, great artist!